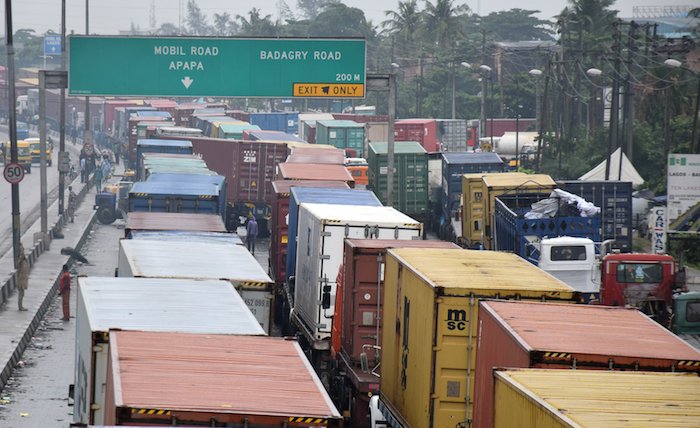 With Apapa housing Nigeria’s two major seaports (Apapa and Tin-Can Ports), over 27 tank farms, several off-dock terminals, and manufacturing facilities, movement in and out of the city remained a hard nut to crack for several years. This was due to long queues of trucks and tankers struggling to gain access to these facilities.

Apapa, which has the capacity to handle only 2,400 trucks and tankers per day, has over 7,000 transverse it daily as 50 percent of the trucks go to the port, 30 percent to the tank farms while the remaining 20 percent go to the manufacturing facilities.

This resulted to chaotic traffic situations suffered leading to difficulty in cargo evacuation, high cost of doing business as well as health hazards for business owners, port users and residents. The protracted traffic congestion also led to rise in cost of services in areas of statutory payments to terminal operators, shipping line, duties and taxes, and accumulated delays that constituted about 40 percent of the total cost borne at the port.

Also, the cost of transporting containers from ports in Lagos to importers’ warehouses increased astronomically in the last quarter of 2020 as shippers paid as much as N1.5 million to transport one 20-foot container from Tin-Can Port to warehouses in Lagos, a haulage that formerly cost between N300,000 to N400,000.

With its mind set on finding a lasting solution to the gridlock, the Nigerian Ports Authority (NPA) and its partner, the Truck Transit Park Ltd (TTP), on 27 February 2021, deployed an electronic call up system for organising, scheduling and batching trucks into Apapa.

Three months on, TTP has been able to process about 100,000 trucks; register 5,700 transporters on Eto platform, and process about 700 trucks for Apapa Port on daily basis. Although, only about 2,700 trucks are required for Apapa and Tin-Can Ports per day, the Eto system processes about 1,400 trucks daily, and with the full deployment of the technology to Tin-Can on May 31, it was expected that there would be a spike.

Interestingly, the call up, which was introduced to regulate the number of trucks that can be released on the road at any point, is yet to realise its objectives due to a bag full of challenges that limit the gains of the call up system.

One of the biggest setbacks for the call up was road construction in Apapa. Presently, one side of the bridge leading to Apapa is closed, leaving only one lane for in and out bound traffic. This is in addition to the construction at the Tin-Can area that makes it impossible for trucks to access the Port.

“There cannot be an efficient policing of the roads without the roads being available for use. It was expected that Apapa and Tin-Can Roads would have been fully available for use before the start of the call up but that has not been the case,” said Temidayo Adeboye, chief operations officer of TTP in an interview with BusinessDay.

Sometimes, he explained, Apapa roads are clogged not because the Eto App is not working but because the road available is too small to handle the volume of traffic.

Another setback was not having tankers lifting petroleum products from tank farms, on Eto platform. Apart from the fact that many of these operators built tank farms without the required infrastructure, the tankers and tank farms are not represented on the Eto platform, making it impossible to control thousands of tankers that lift products.

“When we cleared up traffic along the Apapa axis into the port, we started seeing a shift in tankers taking advantage of the successes that we have recorded by using the Apapa axis such that the likes of NIPCO and Aiteo now do more volumes than before,” Adeboye said.

Prior to Eto, there was human technology interface that resulted to rent-seeking where security officials deployed to manage the traffic were accused of profiteering from the problem. The officials mount roadblocks and forced truckers to pay between N70,000 and N200,000 per trip.

For this reason, the call up was built on having an extortion free enforcement. However, it was discovered that Apapa environ started witnessing some push backs. First, those profiteering from the gridlock weren’t happy when the solution came, and they started working within their means to manipulate and circumvent the system using fake tickets.

According to Mohammed Bello-Koko, acting managing director of the NPA, about 30 toll-points have sprung up in Apapa for the collection of illegal monies, and this is a major disincentive to the smooth implementation of the call up.

On its part, the call up was designed to have digital footprint of any valid transaction. This means that nobody can cut corner and still have a valid transaction because there is an electronic barrier that dictates valid attempt to either enter or exit the port without valid call up tickets.

“Our company has zero tolerance for improper action, therefore, all those staffs accused were suspended and they are being investigated” said Jama Onwubuariri, co-founder/managing director of TTP, while responding to BusinessDay question on allegation of bribery against its staff.

From the onset, TTP requested for an ethical law enforcement team to ensure that the objectives of the call up would not be derailed. Though, the Federal Government instituted an enforcement team but people have been complaining. Here, people with valid tickets complain of being forced to bribe the law enforcement to have access, even those without tickets, had to pay their way into the port, and security forces that are not involved in the system also take position on the road to create toll-gates for themselves.

“The truth is that these complain are bound as long as we do not have an ethical law enforcement team, making it impossible to achieve the total anticipated gains of the call up. As a private entity, there is limit to what we can do in this direction but we have escalated it to the government to create an investigative team that would be responsible for monitoring those who are monitoring the system, so that accountability calls can be made when these reports are brought forward,” Onwubuariri suggested.

Meanwhile, stakeholders, who shared their experiences, said the continued use of call up will yield the desired solution in managing truck traffic in Apapa port, if human interface is eliminated and every operator is brought under the platform.

“Though, Eto has its prospect and challenges but this system is the best that has happened to transporters so far. If only we give it time to mature, continue to improve on its challenges and support those championing it,” said Adamu Yusuf, a transporter.

Remi Ogungbemi, chairman of the Association of Maritime Owners (AMATO) who commended NPA and its partner on the Eto initiative, said the haulage business is becoming exciting again since the deployment of call up.

“We have lost so much to the unending gridlock in Apapa, but, the deployment of Eto is beginning to revive trucking business despite the hindrances,” he said.

Ogungbemi however called on government to ensure that all the people that previously participated in various task force operations in Apapa and Tin-Can roads in the past, are not part of enforcement team.

Meanwhile, it was discovered that the NPA has being in discussion with the Lagos State Government, transport unions as well as oil and gas unions to find a way to bring everybody on the Eto platform.

However, to facilitate the use of Eto, there is physical infrastructure development, stakeholder management and collaboration, and deployment of technology. Therefore, to bring the oil and gas tankers onboard, NPA and its partner must first develop the physical infrastructure such as trailer parks, pre-gates to house the tankers, understand the business and how the tank farms want to send their trucks in, before deploying technology.

“We are trying to bring the oil tankers onboard but this infrastructure must be in place before that would happen,” assured Adeboye.

For the call up to achieve the anticipated gains, TTP, Lagos State and NPA have to go back to the drawing board to find a way of bringing everybody on the same platform to enable them organise, schedule and batch truck movement in and out of Apapa.