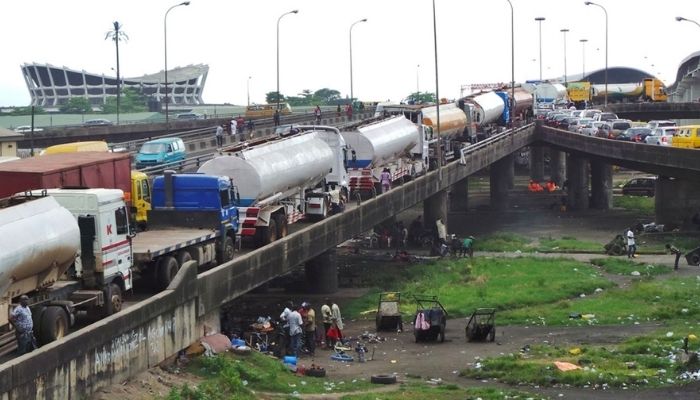 The network of bridges in Apapa can be felt vibrating for a few seconds every few minutes while walking across or inside a stationary vehicle. The vibration is caused whenever trucks move, rather, crawl through the long bridges, either on their way to or from the ports, a journey that up until January 2021, took an average of three weeks, instead of a few hours. For years, hundreds of cargo-bearing trucks would line up for hours on the fragile bridges, getting only occasional ‘expansion joint repairs’ to avoid collapse.

Shipping a 40-foot container from China to the Apapa Port could cost N500,000 for the 10,540-kilometre voyage, but taking the same out of Apapa to Sango-Ota in Ogun state, cost N1 million as of 2020 for a distance of 38 kilometres.

Dubbed Nigeria’s premier port, Apapa as a community was an enclave for elites several years ago. Expatriates and other high net worth individuals favoured it, but as order and sanity gave way to pollution, traffic congestions, and crime, those who had built their lives around the port-city gradually voted with their feet, and businesses followed suit.

“There are people feeding fat from the fact that there is traffic, but now, it is affecting the generality of businesses,” Paul Odey, general manager/CEO of Apapa GRA Residents’ Association as at 2016 had told this reporter. “Apapa is more than fuel and containers as there are a lot of other businesses. We only have those two businesses surviving while everything else is dying.”

This has come at a cost to the Nigerian economy. As reported by BusinessDay, a report by the Lagos Chamber of Commerce and Industry (LCCI) noted Nigeria loses N600 billion in Customs revenue annually, including $10 billion in non-oil export sector and N2.5 trillion in corporate earnings across various sectors due to the poor state of Nigerian ports. The congestion in Apapa meant government was losing, businesses were losing but the ultimate winners were security agents and street urchins in charge of extortions at multiple checkpoints.

While an estimated 5,000 trucks seek access to Apapa and Tin Can ports in Lagos every day, the two ports can only accommodate 1,500 trucks, according to the LCCI. To get ahead of the queue is where things get interesting and miserable at the same time.

Interesting when the magnitude of extortion, with its dramatic twists is explored, yet, miserable, when the impact of all these on the immediate economy of Apapa is considered, and even the wider Nigerian state.

“We even used to gamble and pay as much as N300,000 to pass our trucks into the port,” said Bala Mohammed, who owns a fleet of trucks. “By the time you access the road around a place like Eleganza, that is when they will turn your driver back, sometimes beat him and even damage the truck, and the person you paid money to will be unreachable. There is nothing you can do as the money is gone.”

As different ‘movers’ are used to facilitate the movement of trucks, it could be a civilian with influence in the port-city or one of the several military officers deployed to ‘maintain traffic’. If money was paid to a uniformed personnel, and a truck still could not access the ports, they would often threaten to ‘deal with’ with the truck owner when such person calls to lament, according to Mohammed.

The gridlock, much of which was artificially created because of roadblocks where trucks were extorted, made commuting in and out of Apapa a hellish experience. With the usual Lagos traffic, while this reporter could for instance commute for 17 kilometres from Ikeja to the entrance of Apapa Bridge at Iponri within 45-minutes, the remaining 4 kilometres to Point road where BusinessDay is located could take an average of 3 hours depending on how fast the trucks move. The impact affected both individuals and businesses.

In the first quarter of 2020, an interview conducted by the Manufacturers Association of Nigeria (MAN) on critical challenges facing the sector, showed 94 percent of the CEOs had said congestion at the ports had a significantly negative effect on their productivity and cost of production.

“Most worrisome are the issues of deliberate delay in cargo clearing time, raising of technical barriers, rejection of relevant documents by officers of the agency that approved import documents, multiple agencies with duplicated functions and other rent-seeking activities of vested interests at the port that excessively fleece operators,” they said.

Even at the point of entering the port after spending two weeks (on the road), and paying at multiple checkpoints, Mohammed explained that a truck could still be turned back. “We have multiple cabals, so if the mover you pay doesn’t share the money to all the checkpoints, once you get to a particular checkpoint, they will ask your driver ‘how far?’ If the mover is not there or the driver doesn’t know the code to clear his truck, they will turn him back,” he said.

Even though truckers like Mohammed no longer spend as much as N300,000 to access the ports, multiple checkpoints remain sources of extortion, and they still spend up to N30,000 per trip

Technology to the rescue?

After a decade of what appeared to be a hopeless situation, the introduction of an electronic call-up system known as Eto App by the Nigerian Ports Authority (NPA) and its technical partner, the Trucks Transit Parks Ltd (TTP) in February 2021, was welcomed with cautious optimism.

A Presidential taskforce, the Police, Lagos State Traffic Management Authority (LASTMA), the Nigerian Army, and the Nigerian Navy had at different times failed to curb the traffic gridlock in Apapa. To observers, it was doubtful that a mobile app, which could also be accessed through web browsers, would fix the situation.

Five months into the deployment of the electronic call-up system, the cost of transporting containers from Apapa and Tin-Can Ports to importers’ warehouses in Lagos, started declining and currently, has dropped by 75 percent on a year-on-year basis, from N1, 600,000 to N400, 000, according to BusinessDay’s findings.

In addition, the amount paid to shipping companies by cargo owners as demurrage for delay in taking delivery of their consignments has also reduced, since the minimum two-week delay that came with congestion on port roads has been eliminated for now, and hopefully, permanently.

“There is a significant improvement in terms of access to the ports without much stress or having to pay camp boys, cabals, movers, etc the sum of N250 or up to N300 thousand without any assurance of getting to the port,” said Mohammed, who has about 40 trucks already registered on the tech platform.

The Eto App, is used in generating electronic call-ups for trucks, and it has enabled better control and management of port bound trucks. With its introduction, there has been relief for port users, motorists, and Apapa residents from the pains of a decade-old traffic congestion in the entire local government area.

As BusinessDay learnt, fleet owners can register multiple trucks under a single account for either export or import. From the app, they can schedule any truck going to the ports, pay the required fees only and with this, the need to have multiple trucks competing for the roads appears to have been solved.

Once a truck enters the satellite park, they would be booked into the park through the Eto platform, following which the system would batch the truck under 24 hours. If the truck is batched to leave the satellite park, on the same day, it moves to the pre-gate and from there depending on traffic, can be batched out within two days. There are times the process can be completed within 24 hours and a truck would access the port, while in the past, the process took at least 2 weeks.

Once a truck is issued a call up ticket from the gate, it is supposed to move straight to the port without any interference, but with multiple checkpoints cropping out, the automation system is being affected.

This is because once 100 trucks are released from ‘pre-gate’, after one or two hours, another batch of 100 trucks are expected to be released but as multiple checkpoints cause delays, trucks could gradually build up on the roads.

“From Apapa to Ikeja we are now loading for N150,000 to N170,000 which used to cost N500,000 to N1 million before the coming of Eto App,” said Mohammed, highlighting the impact of the technology on the haulage business.

Even though truckers like Mohammed no longer spend as much as N300,000 to access the ports, multiple checkpoints remain sources of extortion, and they still spend up to N30,000 per trip. A fraction of what was paid before, but still extortion.

Multiple checkpoints, which according to him are illegally mounted by some policemen, joint task teams like LASTMA, FRSC, and NPA, sometime insist drivers ‘give them something’, despite having an Eto ticket.

Recalling an experience earlier this week, one of his trucks was coming from Ijora-Olopa, and the driver had a valid Eto ticket but a policeman stopped him, demanding for N2,000.

“I spoke to the officer and told him the driver is having a valid Eto ticket that qualifies him to access the ports without any interference, and he replied that the Eto ticket is not for him, as long as he is on the road,” Mohammed recounts.

This, he says, highlights the kind of entitlement mentality by uniformed personnel, who remain adamant that if not given money, trucks will not pass. “If you call the area commander or superior police officer, he will tell you that they are not aware and that they did not send those people to do such, yet we have made complaints several times but those people on the field refuse to change their attitude,” he says.

The multiple checkpoints affect not only truckers, but also the automation system, which should not have human interference.

BusinessDay learnt there are some drivers who know their rights, fight for it and will pass through without paying bribes. There is another twist to those who fight for their rights. When security agents trying to extort a truck driver see such a person is unyielding, they could tell them to park somewhere and let other trucks pass. The moment the driver agrees to park the truck, they call LASTMA officers to come and arrest the truck on the claim it has been ‘wrongly parked’. This would end up with the truck being towed away by LASTMA, which then imposes heftier fines on the truck. All of these, just to keep truck drivers pliant and to keep paying bribes, which the Eto App should have eliminated completely.